A lovely space, if you don't look up

On a beautiful sunny day when the first chills of autumn were turning the leaves yellow, I visited a couple of the little poet’s hermitages of which there are several in Matsuyama. First I went to Isso-an, home of the free-form haiku poet Taneda Santoka who lived until 1940, then going back in time as it were, I walked around to the other side of Matsuyama castle to Koshin-an, built by Kurita Chodō who lived until 1814.

Koshin-an is rather remarkable in that it’s still here at all. Originally built in 1800, today it sits next to the main railway line through northern Shikoku, surrounded on all sides by bland, outsized buildings, including an obnoxiously large apartment block that cuts out the evening sun. Koshin-an was extensively restored starting in 2000, and in fact, the interesting exhibits documenting this restoration show that it was practically rebuilt. When I first entered the enclosure where the Koshin-an stands, I didn’t notice the hermitage itself because it’s very well camouflaged by a huge old wisteria. I thought that the administration building was the object of my interest until a rather surprised admin lady pointed me to the actual Koshin-an.

Passing through a rustic bamboo gate, you enter another little world almost, encompassing a pond, some rocks and pines, a well, and the gnarled wisteria that dominates everything. The Koshin-an is a tiny, one-story building, with sliding doors that allow one entire side to be opened up to face the garden. This is an enchanted space, graced with a beautiful wooden lantern, that bids even the most unspiritual soul to sit and meditate a while.

While I’m glad that Koshin-an survives with its magical zone under the wisteria, you have to avoid raising your eyes if you don’t want to see the urban ugliness beyond its walls. As Alex Kerr, the depressing Asian scholar has posited, the tragedy of Japan’s often spoiled landscape lies in the haiku aesthetic itself, which allows the view to focus narrowly on beautiful minutiae and presumably fail to notice the other mess all around. The truth of this proposition is regrettably validated by this shrine to an early haiku master, surrounded on all sides by unprepossessing concrete. That said however, Koshin-an is easy to get to from JR Matsuyama Station, it’s free to enter, and it’s a fine example of a pocket-sized Japanese garden, so if you’re in the area, I recommend that you drop in. 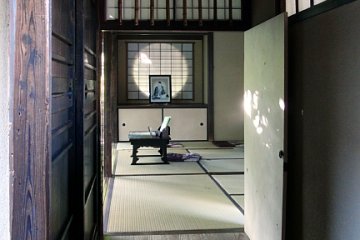 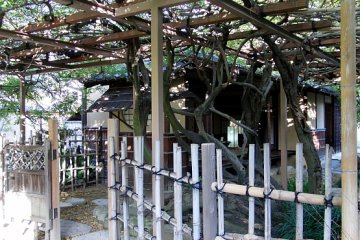 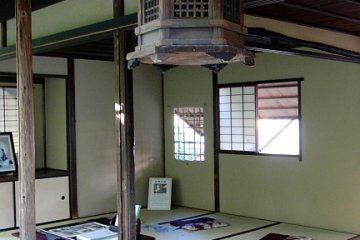 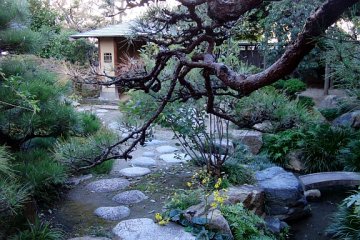