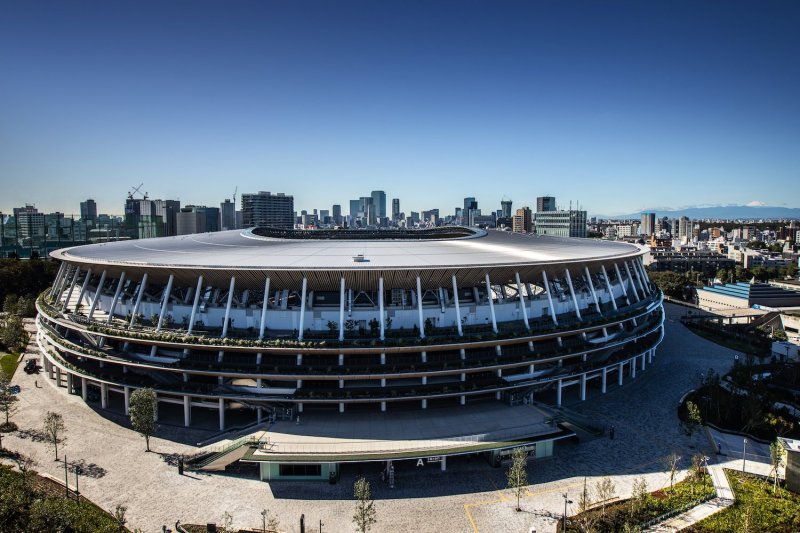 The National Stadium was used as the main stadium for the 1964 Tokyo Olympics and was then converted into a brand new stadium for the next Tokyo Olympics and Paralympic Games. It is located in Kasumigaoka, Shinjuku District, where the Olympic opening and closing ceremonies will be held and Paralympic Games, as well as athletics and football matches, after which the stadium will be used for sporting and cultural events.The stadium has a capacity of 68,089 seats.

There is a park landscape with lots of trees around the stadium. The open facade is fitted with greenery all around and is intended to promote ventilation of the interior of the stadium. During the construction, attention was paid to the use of natural materials such as wood. This, which comes from 47 prefectures in the country, was also used for the roof construction, the facade, as well as for the changing rooms and boxes.

Located right next to Shinjuku Chuo Park, THE KNOT TOKYO Shinjuku is a modern hotel with an exceptional design and easy access to the nearby Shinjuku train station and the Meiji Shrine. The 14-story hotel building was renovated and reopened in August 2018 as THE KNOT TOKYO Shinjuku . The western-style rooms offer a park view on the top floor as well as a newly opened terrace suite. The spacious atrium design offers a relaxed atmosphere and connects the restaurant, bar, lounge and lobby with one another. One of the highlights of THE KNOT is the delicious dishes. There are six areas in which food and drinks are offered. From the grill area to high-quality black tea and fresh bread, everything is on offer.

Oakwood Premier Tokyo comes from a brand of standout luxury hotel & service apartments right at the heart of the Tokyo metropolis. It is located in the business hub of Marunouchi with JR Tokyo Station in close proximity. This will allow guests and travelers to easily access the city's extensive transport network and visit various landmarks such as Imperial Palace, Tsukiji Fish Market, Ginza and Shopping District. Boasting 123 luxurious apartments on the upper floors of a multi-serviced complex, each room offers a magnificent view of the city, not to mention all furnished and a fully-equipped kitchen set which is rarely seen in your everyday service apartment. Without doubt, these spacious tranquil retreats are curated to give you the amenities and services of a luxury hotel and a feeling of home. They are good options for both business executives and leisure travelers from one night of a short-stay to a few weeks/months of mid-to-long-term stay.

Just minutes from Shinagawa Station, the Grand Prince Hotel New Takanawa is surrounded by lush greenery in the Takanawa area, with rooms offering balcony views of the nearby gardens and the surrounding Tokyo cityscape. This urban resort features convention facilities like the Hiten banquet hall, the international Convention Center Pamir, as well as a wide variety of Japanese, Chinese and Western restaurants.

There is a restaurant right in front of the Meguro station where you can eat your own fish. All kinds of Japanese dishes and fresh seafood are also served. In some pools inside the restaurant you can catch your own fish with a fishing rod and net and then let the staff know which table it should be brought to. You can watch the fish being prepared in the kitchen and let you know in advance how the fish should be prepared: whether as sashimi, grilled, boiled, deep-fried (with tempura) or as sushi. If you don't manage to catch your own fish, then you can of course order a fish from the menu. However, the price is much lower if you want to have your own catch cooked .

The Pokémon Café in Nihonbashi, which opened in March 2018, is the latest character café in the popular series of games and series in Tokyo. The café and the adjacent Pokémon Center DX store were opened in 1997 on the occasion of the 20th anniversary of the first store. The bright café, which is furnished in warm wood tones, offers main courses, desserts and drinks - all of which are arranged with a focus on one or more Pokémon and some are suitable and limited to certain topics or seasons. You can also find exclusive merchandise here - from plush toys in chef jackets to bowls and cutlery with Pokémon motifs. They also sell Pikachu Sweets, special sweets and products with the most popular of all Pokémon as a motif. A visit to the Pokémon Café is only possible with a prior reservation, time slots can be selected from one month in advance and also in English via the website. It is located on the 5th floor of the Nihombashi Takashimaya Shopping Center, which is not far from the Tokyo and Nihonbashi stations.

PIZZERIA & BAR NOHGA is an all day dining restaurant interpreting a fusion of “Spanish Italian” cuisine and has a kitchen to table design. There is a casual bar area and restaurant where you can take a peek inside the open kitchen whilst enjoying your meal. Visit the cafe for a range of coffees and teas along with an offering of tapas snacks and seasonal desserts. The cafe also offers an assorted dessert and all-you-can-drink cafe set. Breakfast takes on the art of sharing, where a range of platters are combined with focaccia and your choice of eggs cooked your way. Coming for lunch? Choose from a selection of pizzas, pastas and salads. Each lunch menu is accompanied with homemade soup, iced tea and focaccia. Dinner time offers a range of exquisite tapas and pizzas that can also be shared. Breakfast: 07:00 - 10:00, Lunch 11:30 - 14:30, Cafe 14:30 - 18:00, Dinner: 18:00 - 23:00 with last order at 10pm.

This huge park in the heart of Tokyo is known for its numerous sports facilities. It also offers many other attractions for visitors of all ages. The most famous place is the Jingu Stadium, the oldest baseball park in Tokyo. It was opened in 1926 and is the home of Tokyo Yakult Swallows. Baseball is one of the most popular sports in Japan and Jingu Stadium is a great place to see the excitement of Japanese fans. An ice rink, tennis courts and a tee are some of the other facilities on offer. There is also a Meiji-era picture gallery for history buffs. The complex is located east of the revered Meiji Shrine and is only a few minutes' walk from Aoyama-itchome Station.

The venue for the gymnastics and water polo competitions during the 1964 Tokyo Olympics, the Tokyo Metropolitan Gymnasium continues to be an important sporting facility for the city today. It will host the table tennis competition during the 2020 Olympic and Paralympic Games. The site has an interesting history. It was once owned by Iemasa Tokugawa (1884 to 1963), a politician and diplomat, and the 17th hereditary head of the famous Tokugawa shogunal family. The Tokyo government purchased the land and buildings in 1943, it was then used by US military officers for some years following the Second World War. After the site passed back into the hands of the Tokyo government in 1952, all the former wooden buildings were torn down and a modern concrete gymnasium was finished in 1956. The facility underwent a complete renovation between 1986 and 1990 and the city has continued to make additions and improvements over the years. The main arena can seat up to 10,000 people. The gymnasium has hosted both national and international sporting competitions in diverse sports, such as volleyball, wrestling, and figure skating. Since 2000, the arena has also been used for concerts and Katy Perry performed there in 2015. A new kind of system for managing the gymnasium was instigated by the Tokyo government in 2006, with Tokyo Sport Benefits Corporation being the current designated manager. Some of the facilities, including the swimming pool, training room, and athletic fields are usually open for use by the public. However, please note these are currently closed due to preparations for the 2020 Tokyo Olympic and Paralympic Games.

The National Noh Theatre opened in Sendagaya, Shibuya, Tokyo, Japan in September 1983. The auditorium seats 591 for performances of Noh and Kyōgen, and there is also a rehearsal stage, exhibition area, lecture room, and reference library. [Wikipedia]